Tech And The Brain

To state an opening argument: Technology has killed the modern person’s attention and memory retention spans, let’s briefly talk about this. Be honest with yourself and think, when was the last time you opened an article online, saw a large chunk of text, began reading, and got really bored and your mind drifted? The content of the article may not have been inherently boring but your mind no longer absorbs as much as it used to.  The answer may not be what you think, no, your brain is not being eaten, it is simply being rewired by all the technology in our lives today.

I felt compelled to discuss this after looking at an exert from a book written by Nancy Baym in 2010 called Making New Media Make Sense that I had to read for a class I am taking. In her book Baym analyzes several different concepts the new media age brings up for people and pulls in other people’s works to do this, but the one concept I want to focus on is Technological Determinism. Technological Determinism is, in a short definition, how media and technology is changing people and society. Baym looks at the works of Nick Carr and Tracy Alloway to describe what technology is doing to our attention spans and memory. Nick Carr was a widely read essayist at the time of Bayms book in 2010 and Tracy Alloway was the UK’s University of Stirling memory expert so they are both sources to be trusted. In Bayms analysis Nick Carr discusses his own personal feelings towards Technological Determinism and how he believes it has changed him as a person.  Dr. Alloway presented an academic lecture a year later on how asynchronous and synchronous interaction online differentially affect the brain. Dr. Alloway argued “the instantaneous nature of texting, twitter, and YouTube is not good for your brains working memory”. Because our brains do not process all this new information because a majority of it is irrelevant, Dr. Alloway believes our attention spans are being reduced and our brains are not improving nerve connections like they used to before and I am inclined to believe her.

I myself have noticed a sharp shift in my own personal attention and memory retention over the last few years as I have become more accustomed to using the ever changing technology in this new media age. When I was growing up I lived in a household a few years behind everyone else as far as technology was concerned and I am convinced the 1990’s did not end at my house until about 2007. While my introduction to a lot of the technologies many of my peers grew up with was only slightly later, I feel I have had the same affects on my mental state as it has on them in the same strength. There have been many times recently I simply cannot retain the lengthy readings required of me by the classes I am taking in college no matter how many times I reread them and it is beginning to reflect in my school work. While this trend is startling and depressing I know I am not alone in this situation even though that does little to make me feel better.

Many people and corporations have noticed this over the past few years and there are many studies, articles, and blogs discussing this topic. One such study I discovered in a medical blog stated that Microsoft did a study in 2015 on how technology was impacting attention spans and in a 2,000 person study they found the average human attention span has fallen from 12 seconds in the year 2000 to just 8 seconds currently. 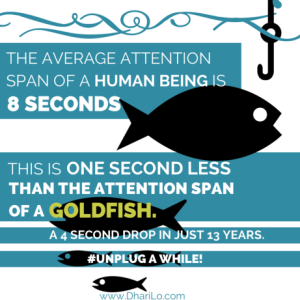 While discouraging, it is not exactly surprising to me and is not the only thing people have noticed. In a blog based in the UK, a media agency called OMD UK did a year long study on 200 people and found “on average, [people] switch between devices including mobile phones, tablets and laptops 21 times over an hour”. This inability to pay attention to a certain device or stick to a reading for a class for too long is a result of all the media chatter we wade through on a daily bases. From the moment you get up in the morning until you go to sleep at night technology is all around you and is invading your mind.